Football matches are something that arouses the greatest emotions among fans. Tension, trophies, phenomenal plays, beautiful goals, incredible stories, but also the bitterness of failure. That's exactly why millions of people around the world play football and watch the games on TV.

The same factors drive sports game developers as they want to recreate that unique footballing atmosphere in the gaming world. Thanks to this, we have so many football-themed games, including the one and only FootballTeam. 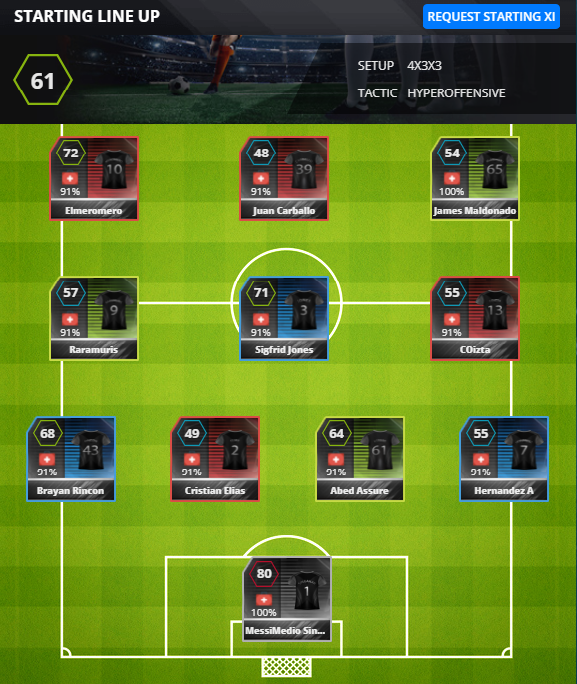 To play a match, you need a club that should consist of at least 13 players. When you complete the squad, you can take part in one of five types of games. In the beginning, it will most likely be the domestic games.

The match engine is responsible for the course of the match and consequently its result.  It considers all the statistics of the players.  On their basis, it estimates the events that happen on the pitch. This means that if your club has a high attack stat compared to opponents' weak defense, the chance of scoring a goal is high.

Likewise, if your club has an OVR that is much higher than your opponents, the probability of winning will also be higher. However, everything is possible. As in real-life football, BATE Borisov defeated Bayern Munich or Switzerland triumphed over France, the league's newcomer can beat the leader as well. This adds realism and extra flavor, especially in the context of the in-game module, where players can guess potential match results.

The course of the match itself is a text report that we know from online services. Messages appear in response to events selected by the match engine. The authors of the comments cannot be denied ingenuity.

How do Set Pieces Work?

Set pieces have slightly different mechanics than the dynamic game. Penalties and free kicks may only be taken by an attacker or a midfielder. Teams in our game don’t have Cristiano Ronaldos or Neymars who want to execute all free kicks or they will feel offended.

You also can't designate a specific player for this. The game engine will choose a free kick or penalty taker based on his Set Pieces skill. The selection is split 3: 1 between the player with the highest Set Pieces value and the player next in line.

The same goes for defending - the player with the highest SP skill has the best chance of a successful intervention, followed by the player who is second in the club in this respect.

Another thing to keep in mind is that when taking a free kick or penalty kick, skills such as Offensive Play and Defensive Play are replaced with Set Pieces.

There is a small chance that the defender will take the corner.

How does FootballTeam's Versatile Playstyle Work?

This is one of the most interesting elements of FootballTeam. You make your choice during the match, thanks to which you increase your player's potential by a certain %. If you decide to play offensively, you will put more effort into attacking. If you choose to play defensively, your player will focus on defense. You can choose one of the eight skills:

It's logical to choose a style that suits your position and skills. The striker will want to score goals, the midfielder will distribute the ball and the defender will take care of destroying the attacks.

After choosing a style, you should also define its intensity, which directly translates into the effectiveness and value of the skill. Activation costs are as follows:

The bonus is added to the sum of the trained skill and items, so it can reach dizzying values. Let's say we have an Offensive Play trained at level 100.  Additionally, we have another 200 PTS from the items. This way, we get 399 PTS of Offensive Play on the fifth level!

In regular league competitions, having an in-game bonus is not that important, so you only need the basic intensity. However, at the highest level of competition, where prizes are really worth fighting for, the fifth level of the playstyle enabled is a must. Thus, if you want to think about climbing to the top of the league hierarchy, you should accept the fact that you will have to spend more Energy.

At the highest level, you can't afford to lose an extra 33% of your efficiency, defense, playmaking, or attacking! It's like your player left the field for the last 20 minutes of the game. Your rivals won't think twice while competing for the greatest trophies and won't hesitate to reach for better resources.