CLUB MODULE. EVERYTHING YOU SHOULD KNOW

1/ CHANGES TO THE CLUB MODULE - PHASE I

A/ TYPES OF EURO IN THE CLUB

B/ CHANGES TO THE CLUB MODULE - DESCRIPTION OF BUILDINGS

1/ CHANGES TO THE CLUB MODULE - PHASE I

The eternal moment has arrived. Check out what's coming to the game as part of Phase I:

🔸 The emergence of basic buildings with full extension.

🔸 A new club revenue system - based on the number of fans and stadium capacity.

🔸 New ticket prices depending on the league and tournament the team plays in.

🔸 Additional club income resulting from the extension of other buildings, such as the Hotel, Parking, Accounting, Green and Recreational Areas and Security.

🔸 Rebuilt contracts to ensure club players' salaries are appropriate to their OVR and the league they play in.

🔸 City map showing building levels and allowing you to check the details of the extension.

A/ TYPES OF EURO IN THE CLUB

There are two types of Euro in the new "CLUB" module. These are:

This is the kind of Euro that can be used only for the construction of buildings. So it cannot be used for player contracts.

Players who deposit their own Euros to the club convert them into Building Euros.

The club owner and assistant can convert Club Euros into Building Euro in the Warehouse.

This is the kind of Euro used to pay players their contracts.

You can convert them to Building Euro at any time, but you can't do it the other way around.

B/ CHANGES TO THE CLUB MODULE - DESCRIPTION OF BUILDINGS

- Each club will receive starting resources to expand its initial building levels.

- The existing extension of clubs will be reset to zero.

- Existing clubs that already have budgets will keep them as Club Euro.

- Clubs, by default, have 15 seats for players; therefore, if there are more than 15 players in the club at the time of the update, then the club, in the first place, should expand the Club Building level 5, which gives 20 seats. (Otherwise, if a player leaves such a club, then the club will not be able to sign a new player). 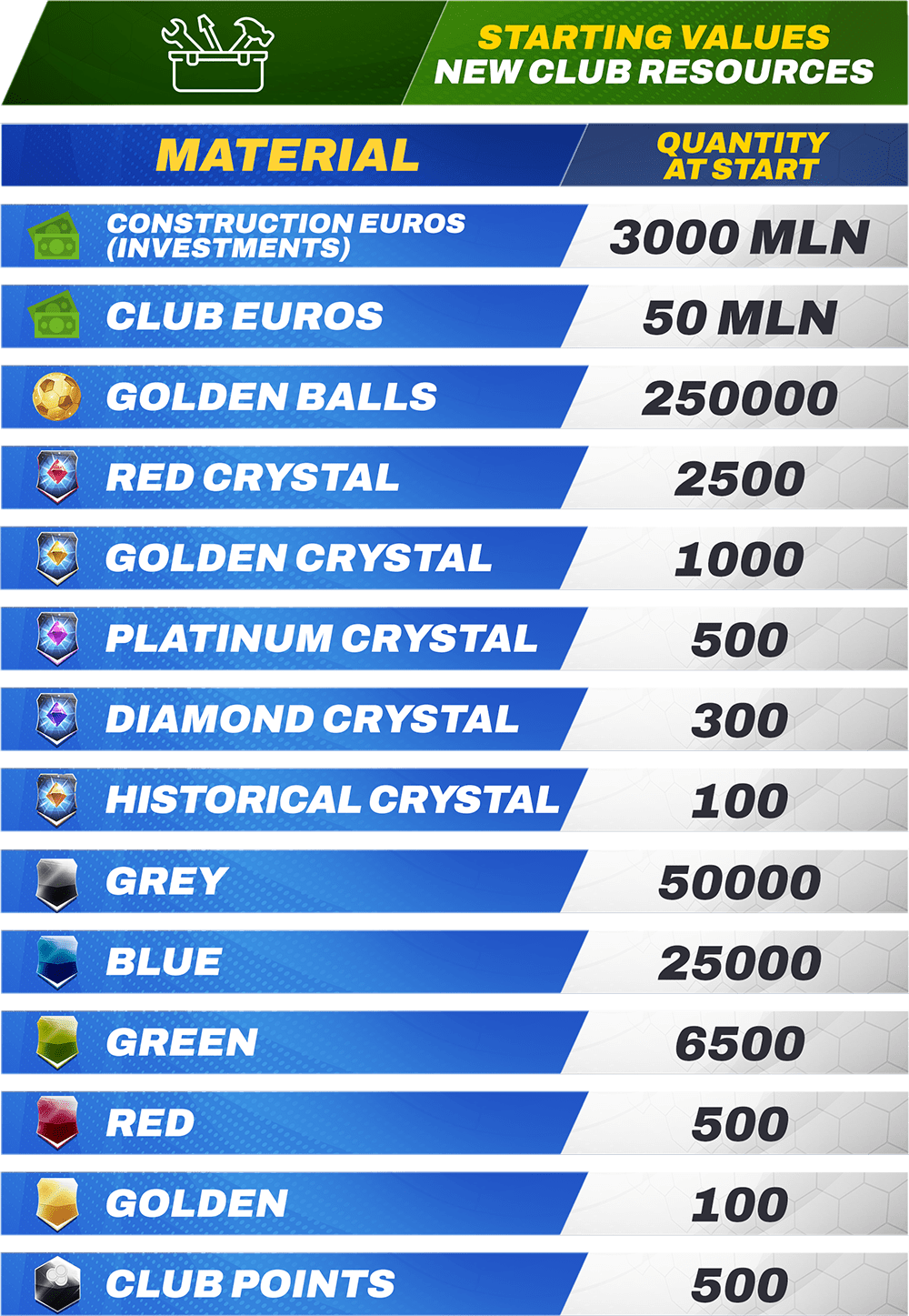 - The number of tickets sold translates into revenue and an increase in the club's Euro.

- The number of sold overnight stays translates into revenue and an increase in the club's Euro. 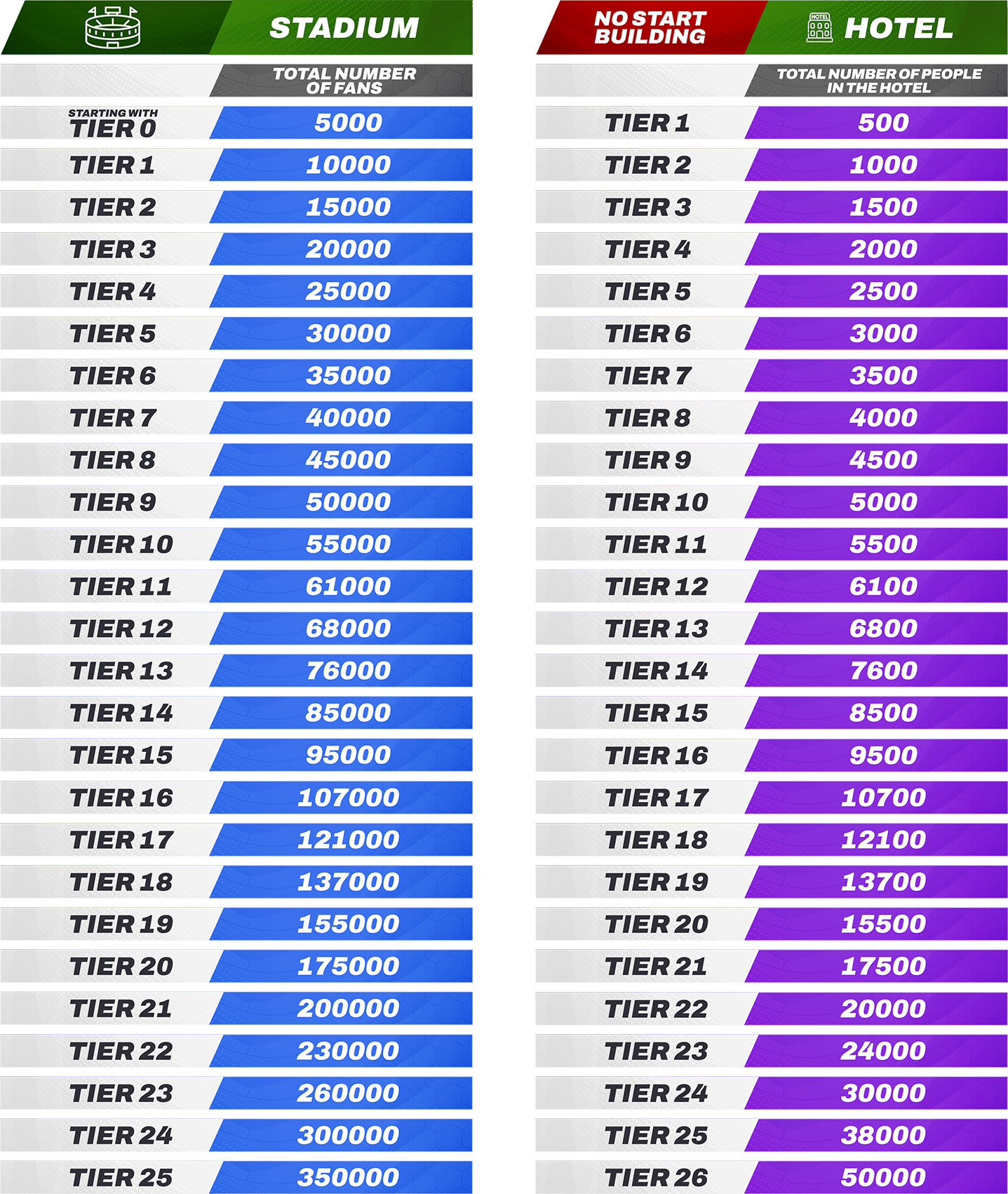 - Extension of Security affects the price of a match ticket.

- Each level increases the ticket price by a certain value.

- Building only works on a certain league level.

- Extension of Parking Spots affects the price of a match ticket.

- Each level increases the ticket price by a certain value.

- Building only works on a specific league level.

Summary: Security and Parking spots - ticket prices in the league. 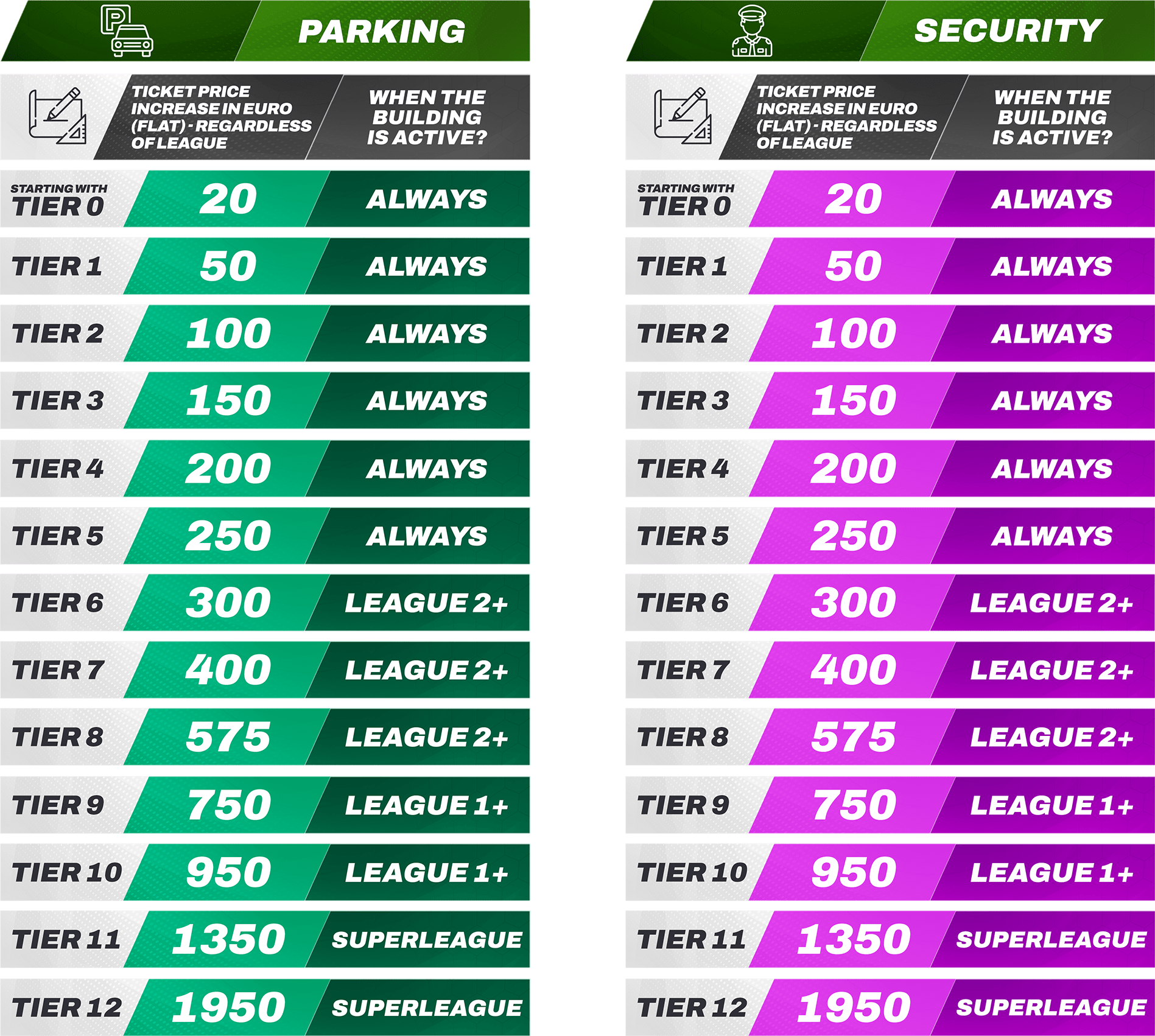 - Extension of the Green Spaces affects the price of overnight stays.

- Each level increases the price of overnight stays by a certain % value. 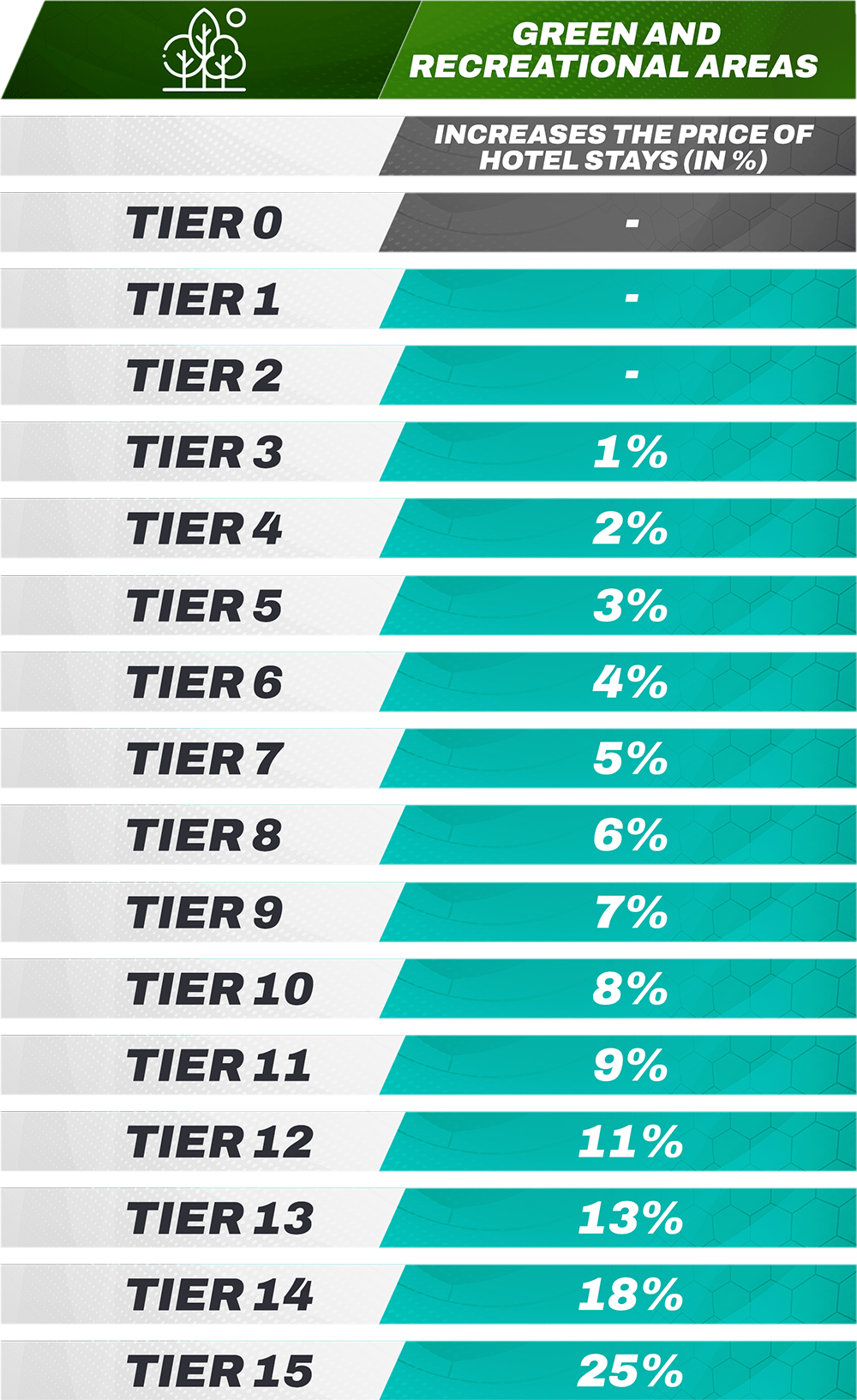 - Accounting is the building where the players collect their contract salary.

- Budget is the Euro the club earns by selling match tickets and hotel accommodation.

- From extension level 6 onward, a certain % of a player's Contract "comes back to the club" as a Building Euro. 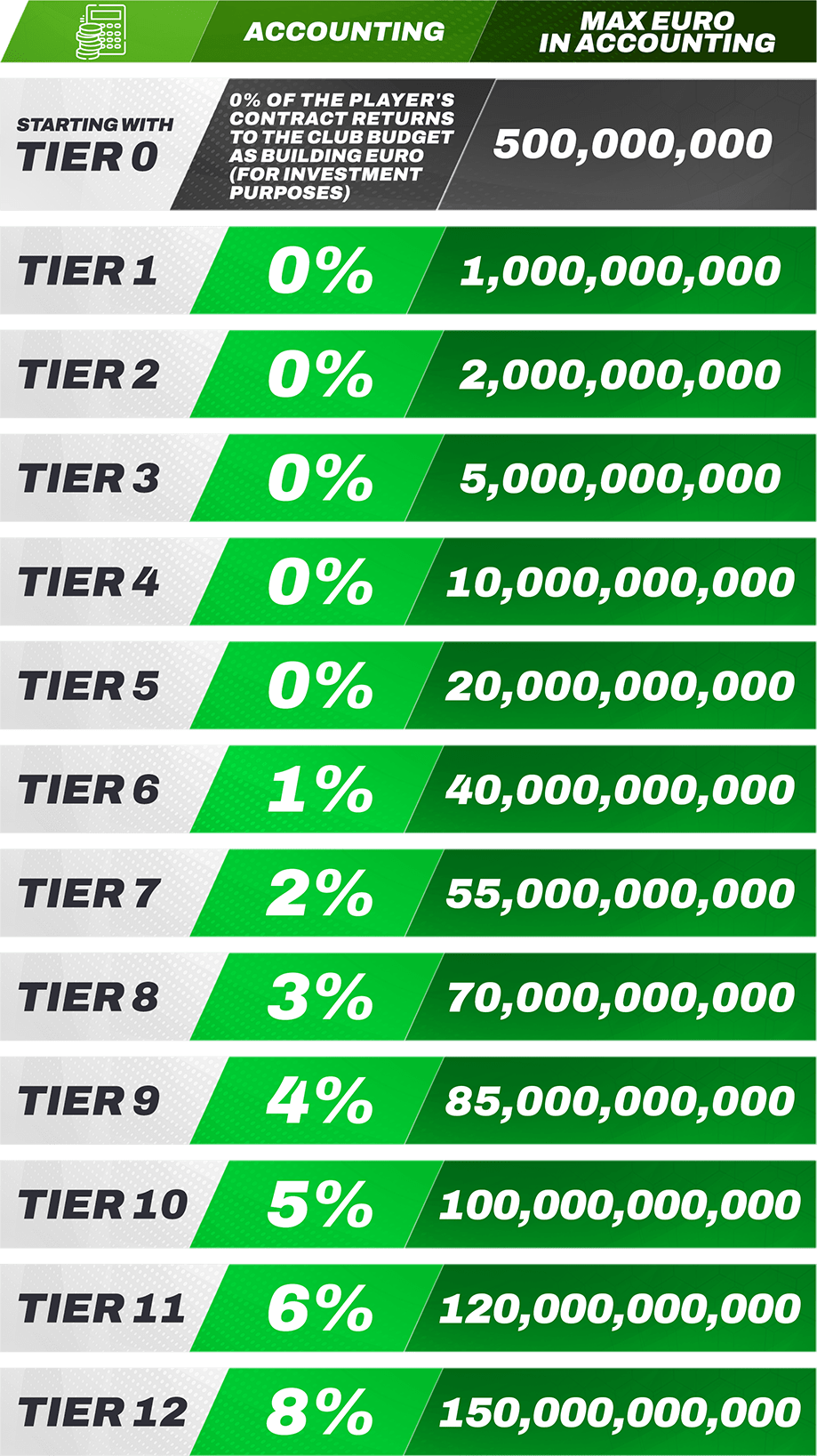 - Each level increases the amount of club training sessions that players can perform.

- A club without an extension has 40 training sessions at its disposal.

- Absence of any one player deducts 5 training sessions as a penalty for the entire club. 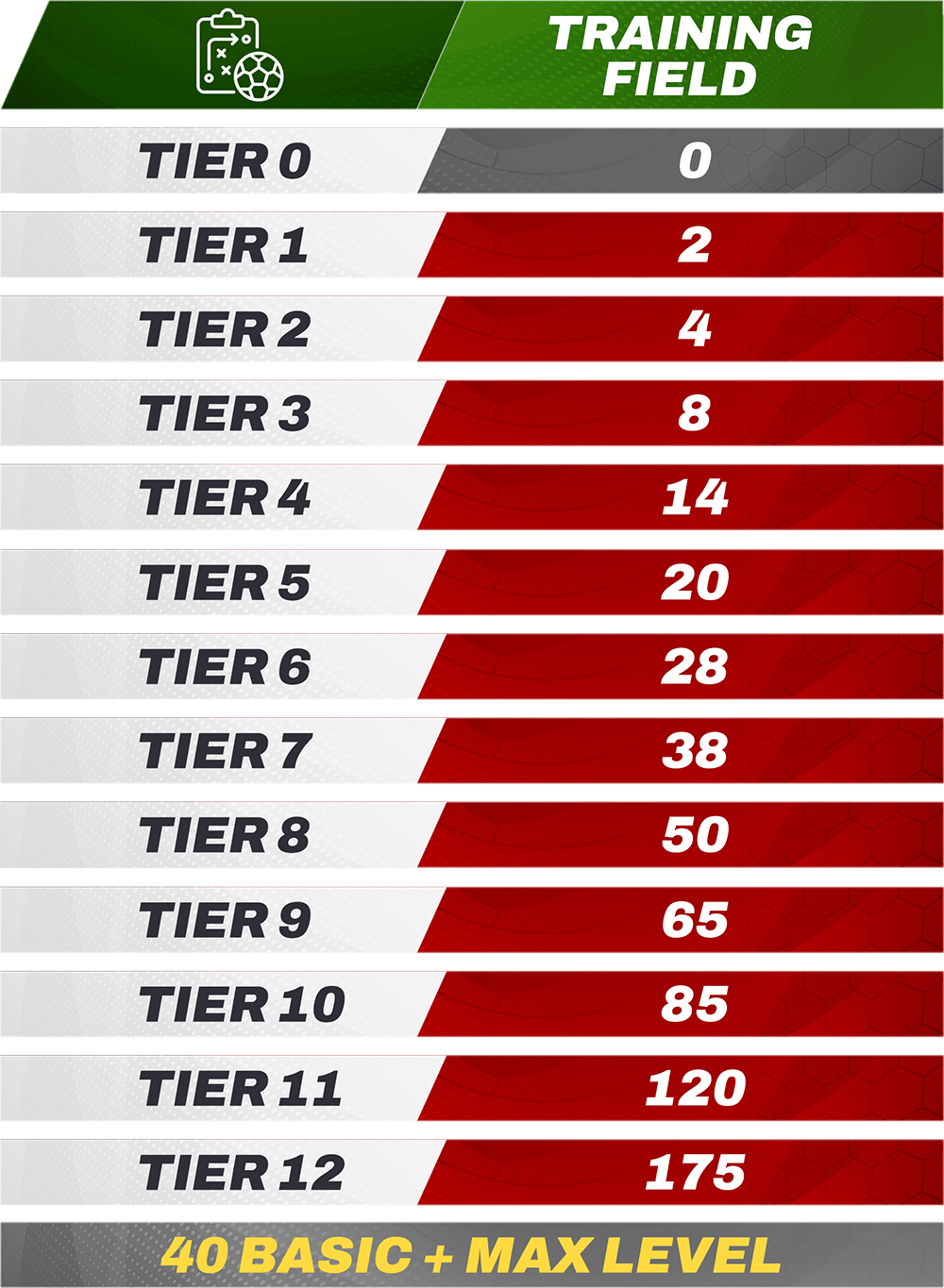 - The Club Building has two functions.

- On levels 6-10, it affects the number of Club Points that are housed in the Warehouse. 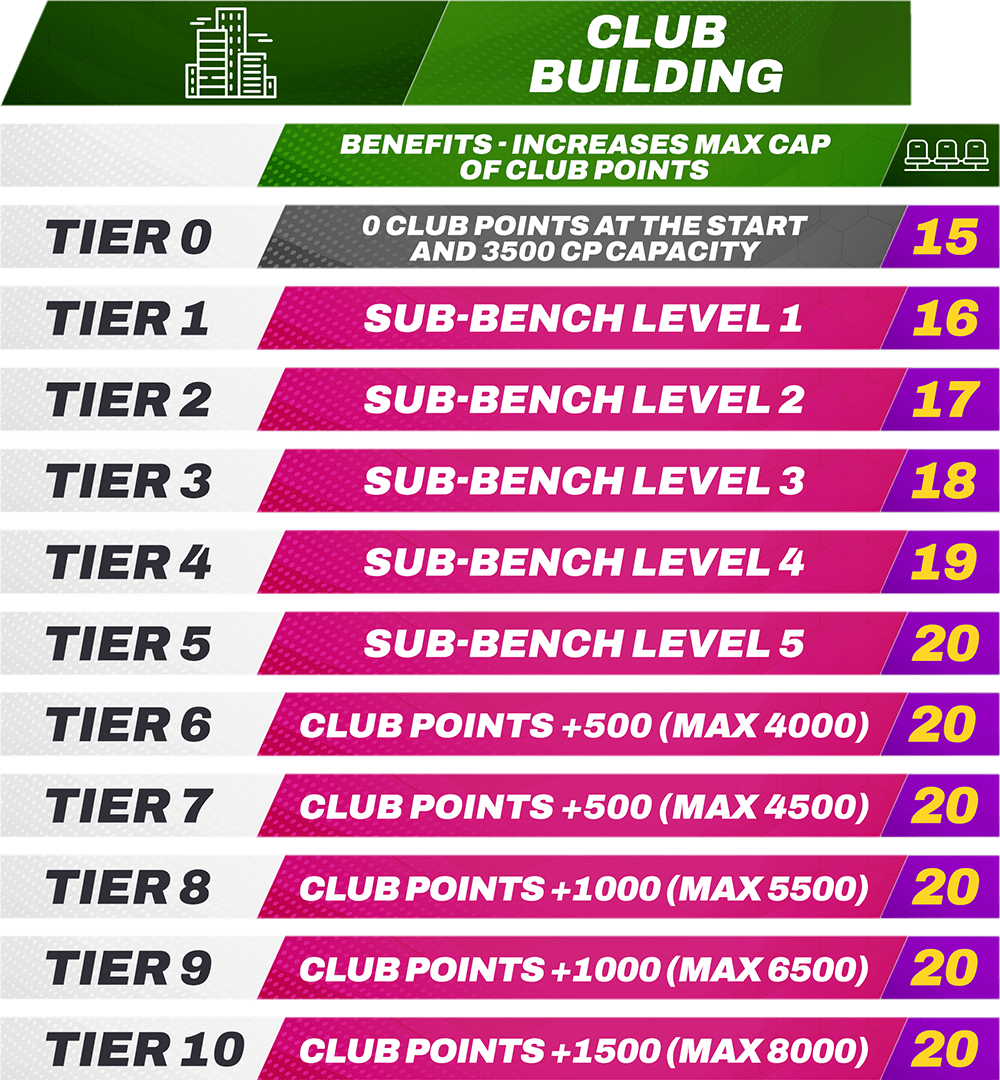 - The Warehouse is where the club collects the resources needed for expansion.

- Players can add their own resources to the warehouse, as well as collect

Club Points - by completing Daily Challenges on the Calendar.

- The club owner can exchange Club Points for specific resources.

Club extension materials will be obtainable in two ways. 🧱

1) Each club member will have the opportunity to dispose of their unwanted items and exchange them at the Club Warehouse for, needed for the club, Building Materials. This is the first way to produce Building Materials (BM). 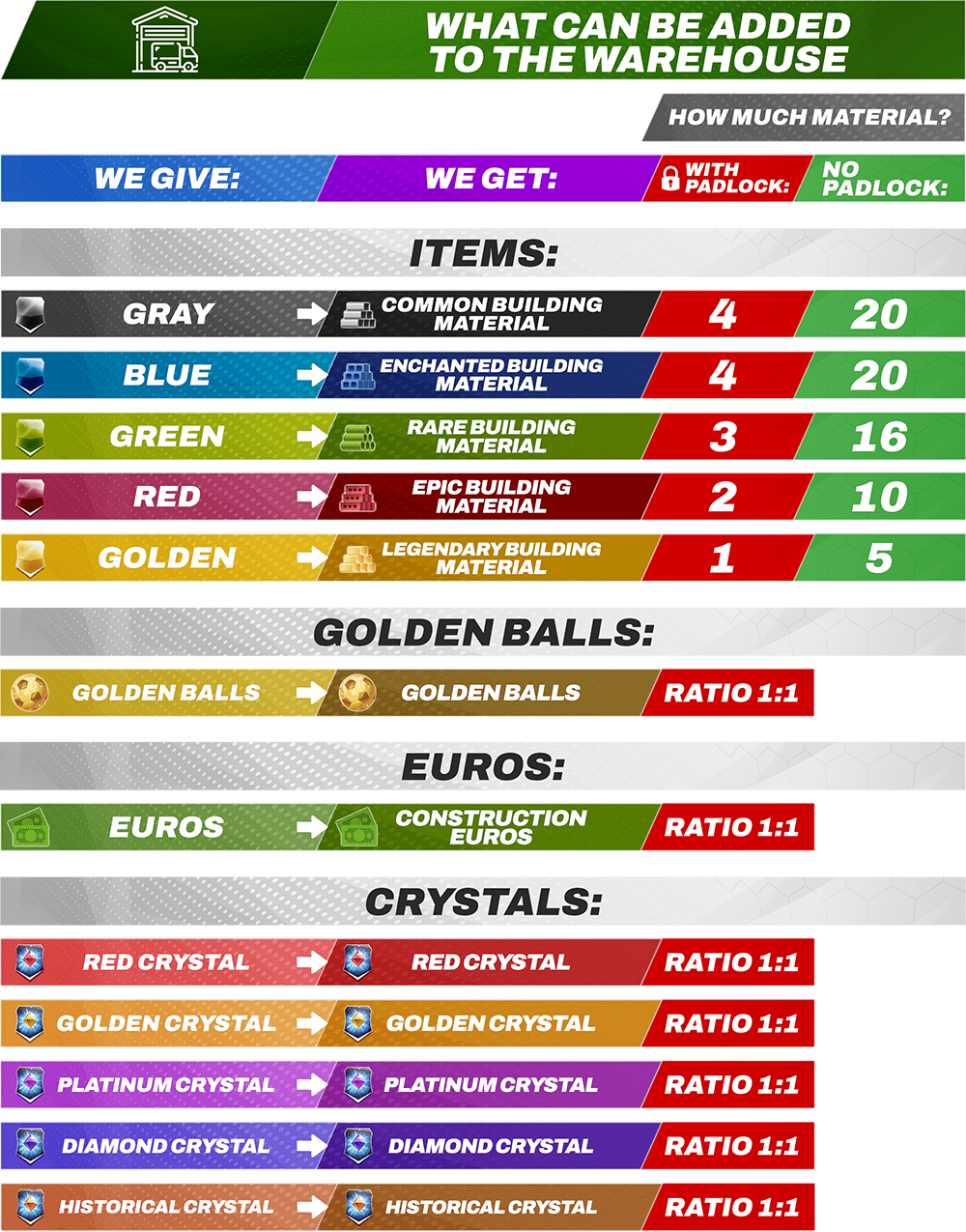 2) The second is completing Daily Challenges from the Calendar. Each challenge brings Club Points for your club. The more Challenges you have completed in a season, the more Club Points the next task gives you. It's just like Club Training - the more committed players you have, the faster your club will grow! 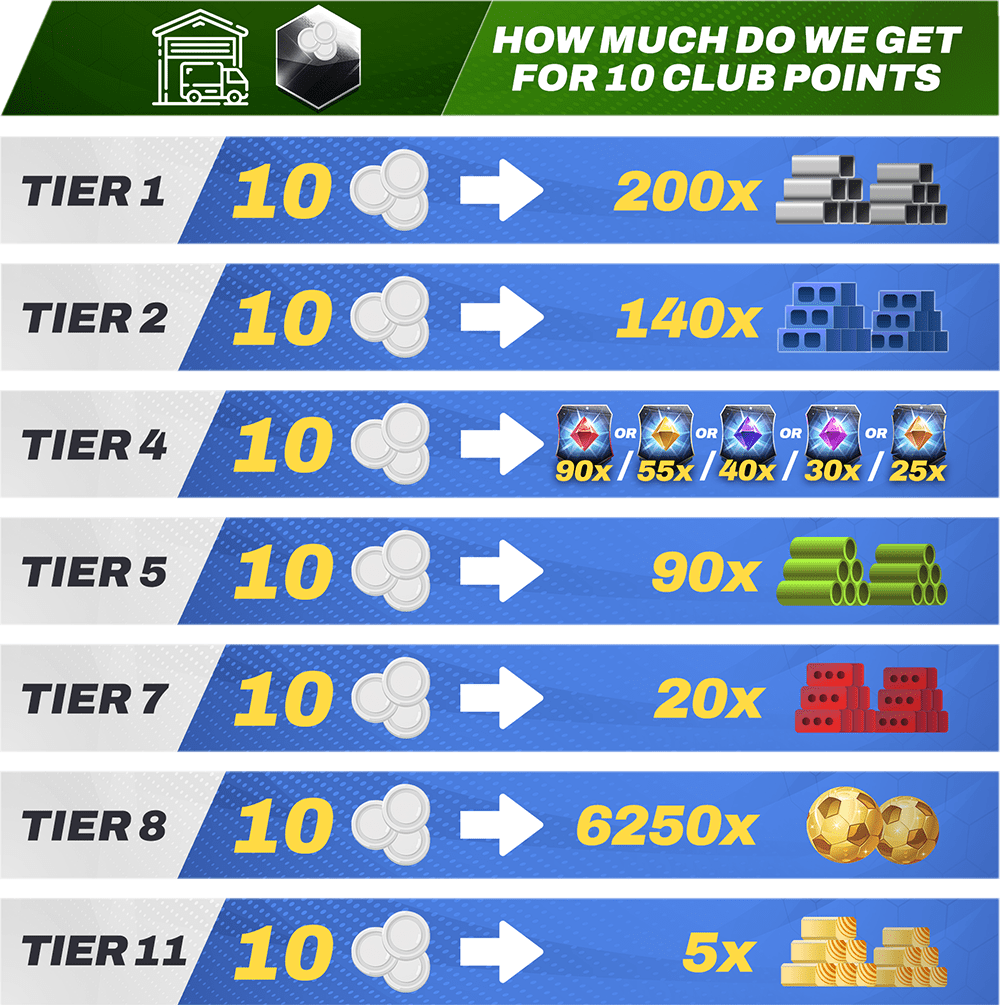 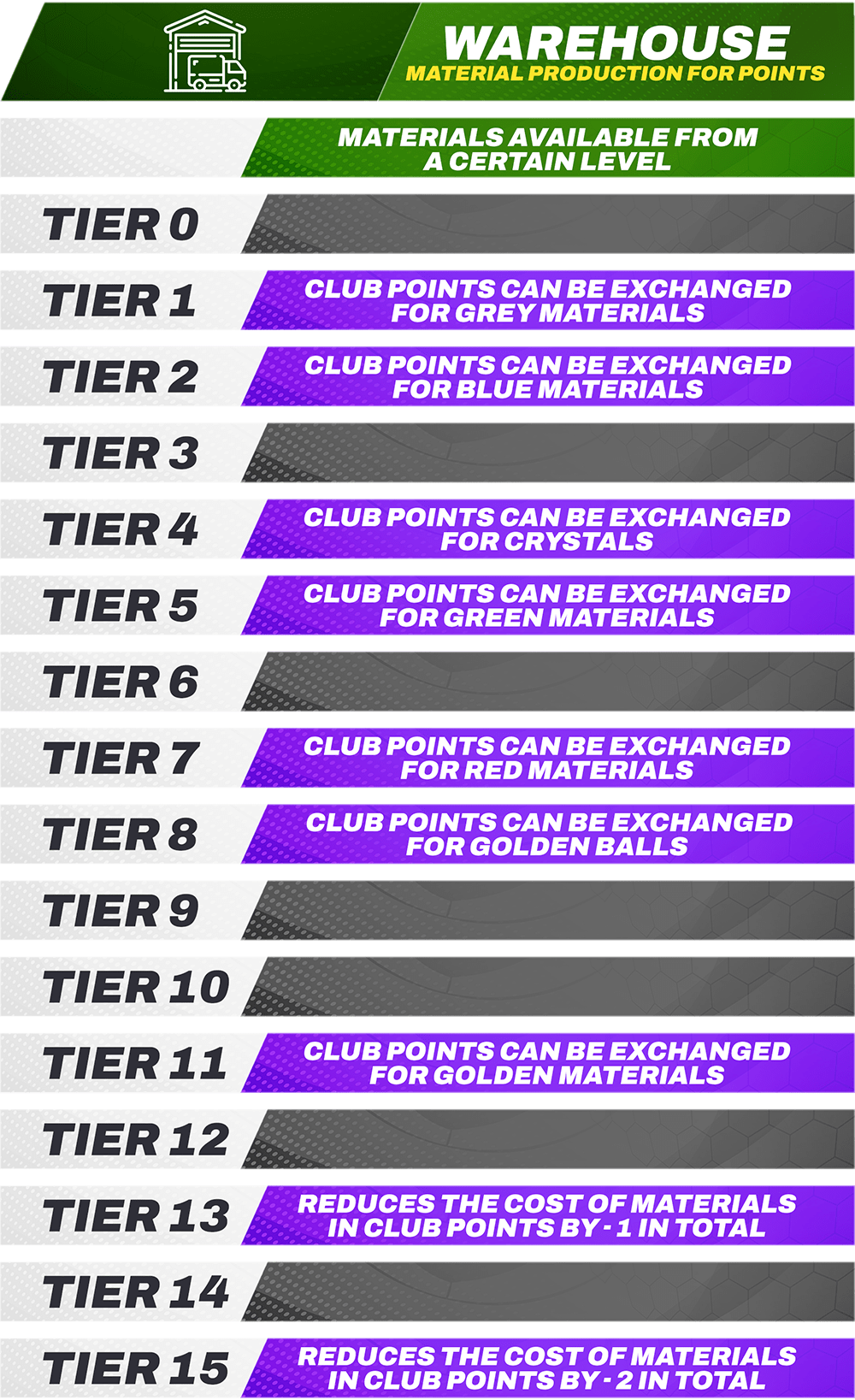 The maximum number of Club Points you can have is 8,000. 🔢 They are used to produce Materials in the Warehouse.

Each player, if he completes 30 Daily Challenges, will earn a maximum of 200 points for his team. As you can easily count, if there are 20 players in the club, they can earn up to 4,000 points with their joint efforts.

In addition, the Premium Assistant adds two points for each challenge - which results in a total of 60 points monthly, i.e., 1200 points for the club with 20 players.

You will be able to earn a really decent income for playing in the Club, which will give each Player a substantial cash boost. Of course, the amount of the contract will depend on the player's OVR, but importantly, it will be calculated on the PTS trained, not on the total OVR. This means that the most important thing is training activity, not items or bonuses. 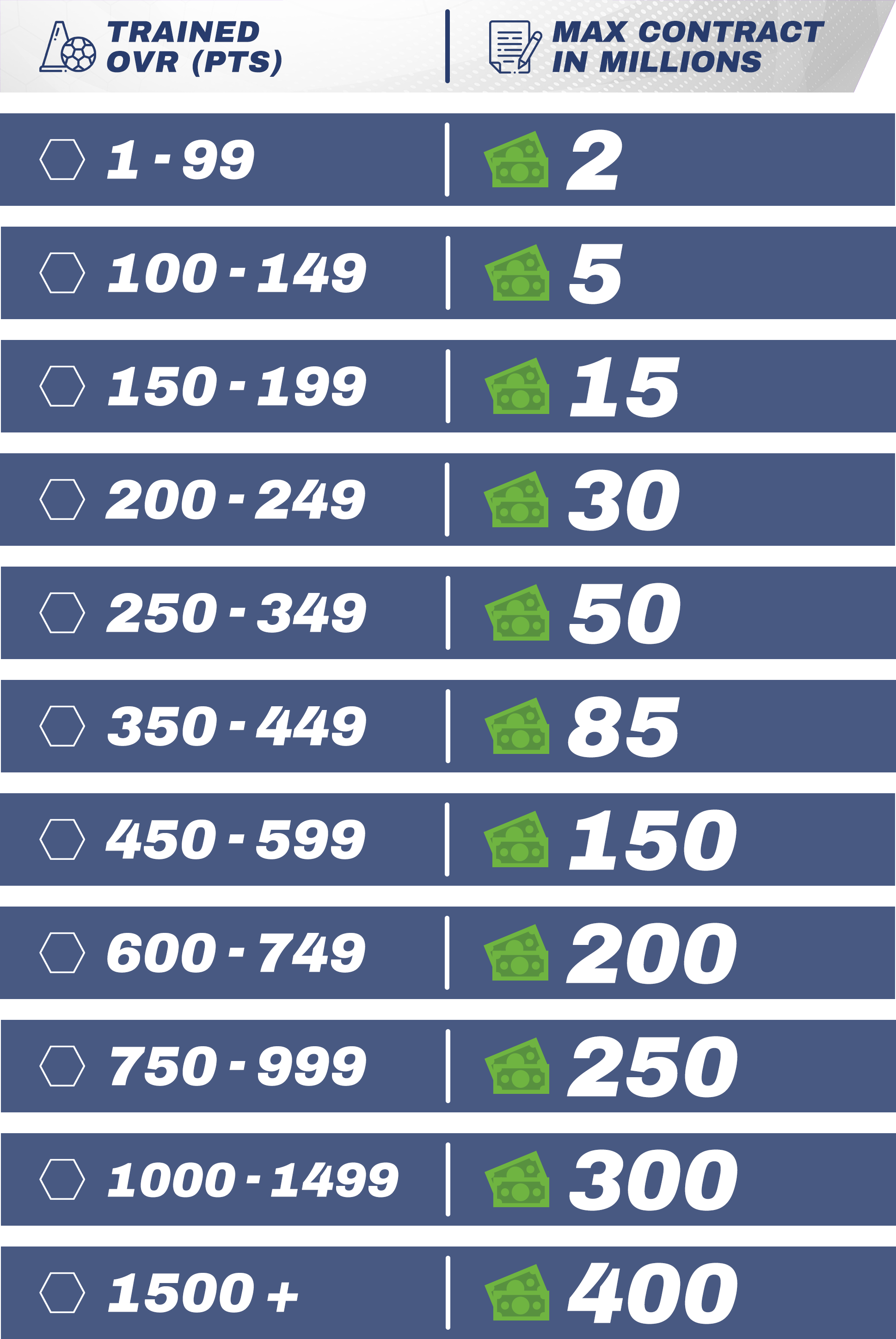 Tickets are sold at standard prices, but additions are also possible, depending on various boosts and buildings. Additions related to Buildings may result from the expansion of other buildings, such as Security or Parking Spots, and will be added as a fixed rate. This option will already be available in Phase 1 of the Club module redevelopment.

Standard - Indicates the standard price of tickets in a given league.

Bonus - Indicates the maximum bonus we can get by selecting the corresponding additions in the Science Academy (as you can see, the bonus is 100% to the ticket base).

Parking - The maximum bonus available from the Parking building as an addition to the ticket.

Security - The maximum bonus available from the Security building as an addition to the ticket.

Parking Spots and the Security building give the corresponding bonus depending on player’s league. The values shown are the maximum values that can be obtained.

TOTAL - The total maximum price of the ticket. 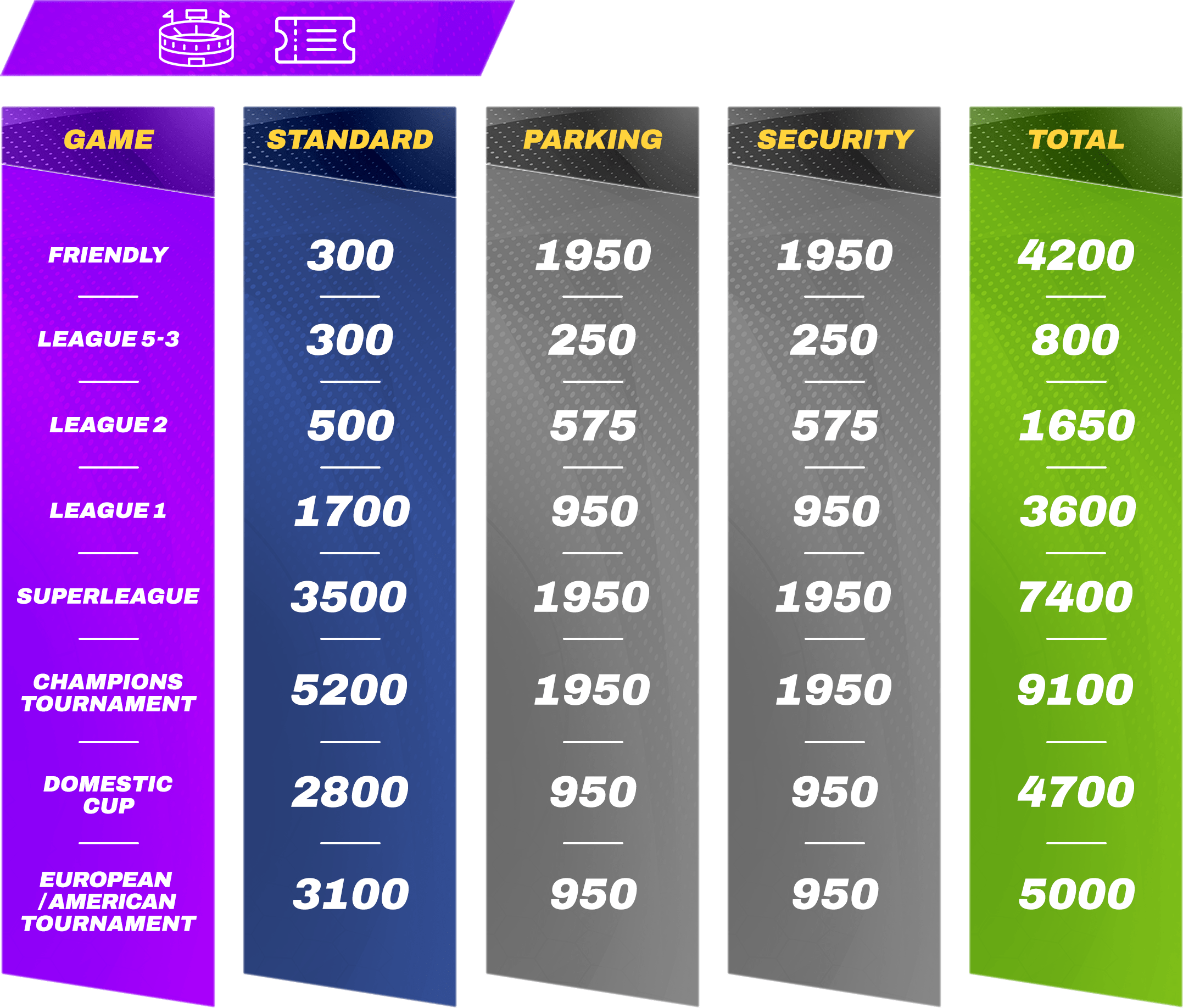 Some of the fans attending the match will want to stay in the Hotel. The prices for the accommodation depend on the LEAGUE in which we are playing. The number of Hotel guests we are able to accommodate depends on the level of our Hotel. We take into account, of course, the Hotel of the club in whose stadium the match is played.

Standard - This means the standard price for staying in a Hotel in a given league. Of course, the larger the hotel, the more guests it will accommodate and, at the same time, increase the club's profit from a given match.

Bonus - Expanding Green Spaces gives a 25% bonus to the price of the hotel. 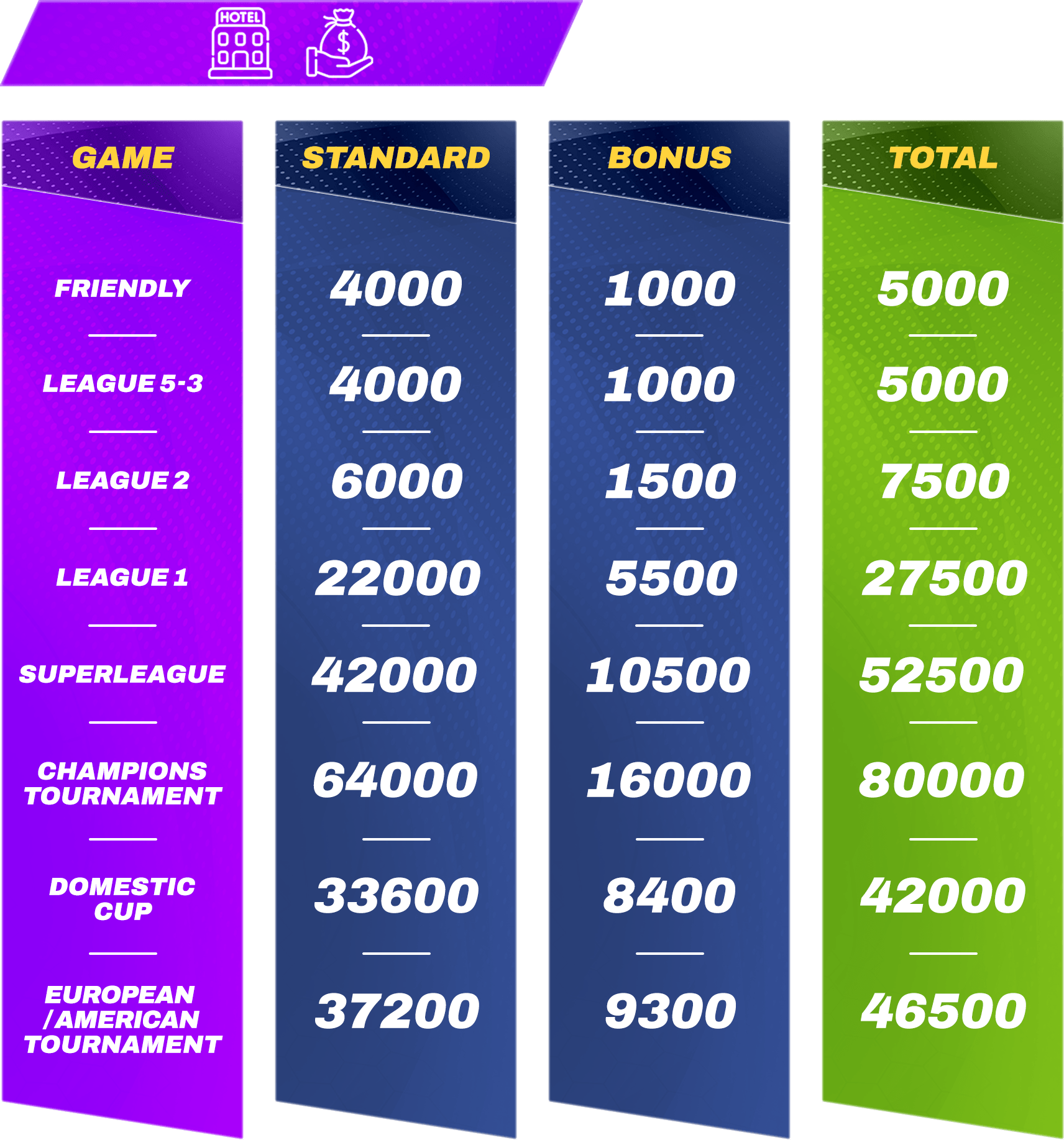 4) SHARING OF PROFITS FROM THE MATCH

It is a good custom to share. Until now, the general rule was that the total amount from ticket sales is split 50/50 between the two clubs. With the changes at the Club, this rule is changed. 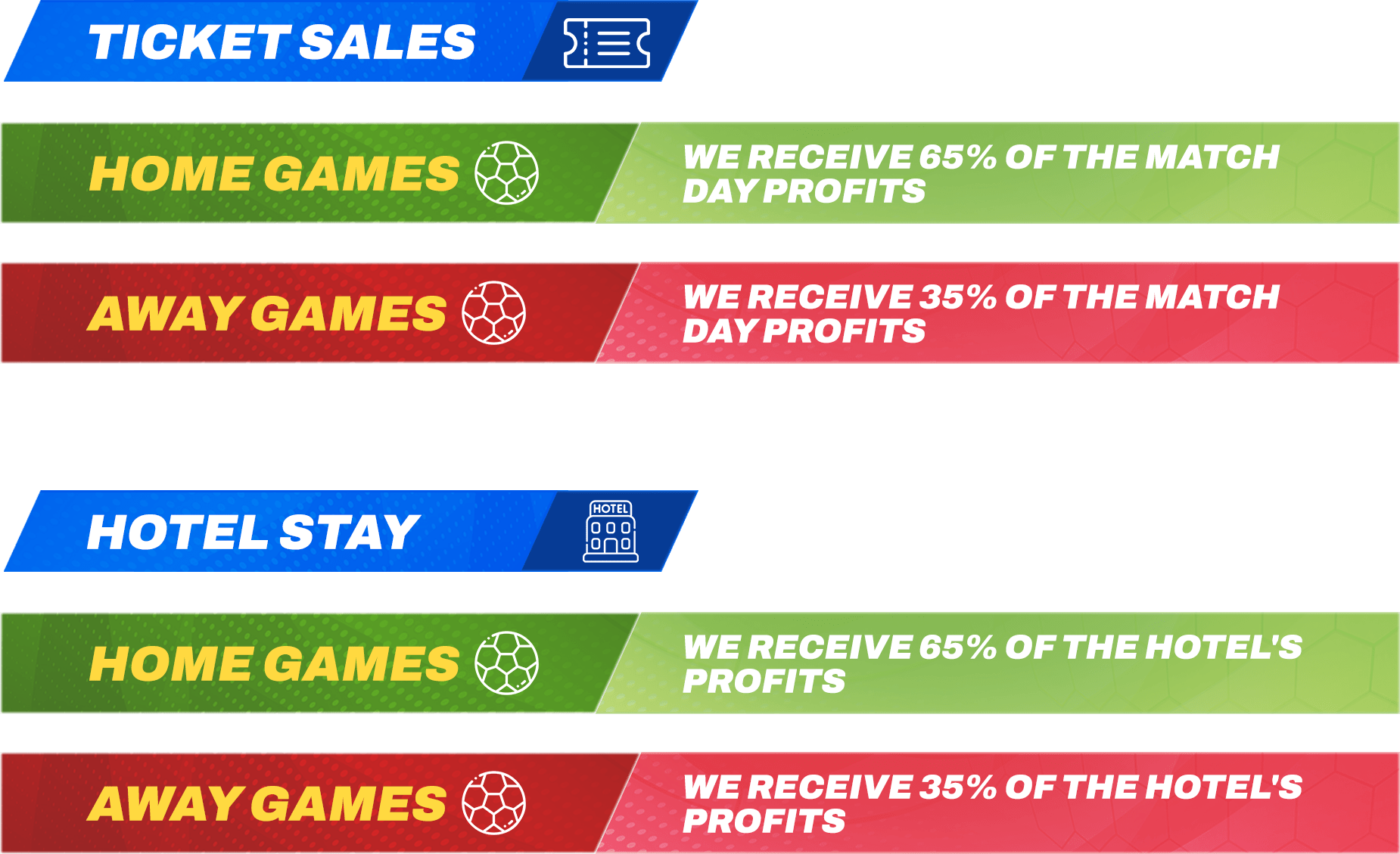 It is worth remembering that exactly as in real life, just as in the virtual stadium, tickets for a match will not always sell out.

In each league, there’s different Interest in the match. In the simplest terms: this is the % of fans who will come to the stadium to watch the match and use the hotel services.

In each match there is a FINANCES tab, which shows in detail the earnings of both clubs and the distribution of profits. 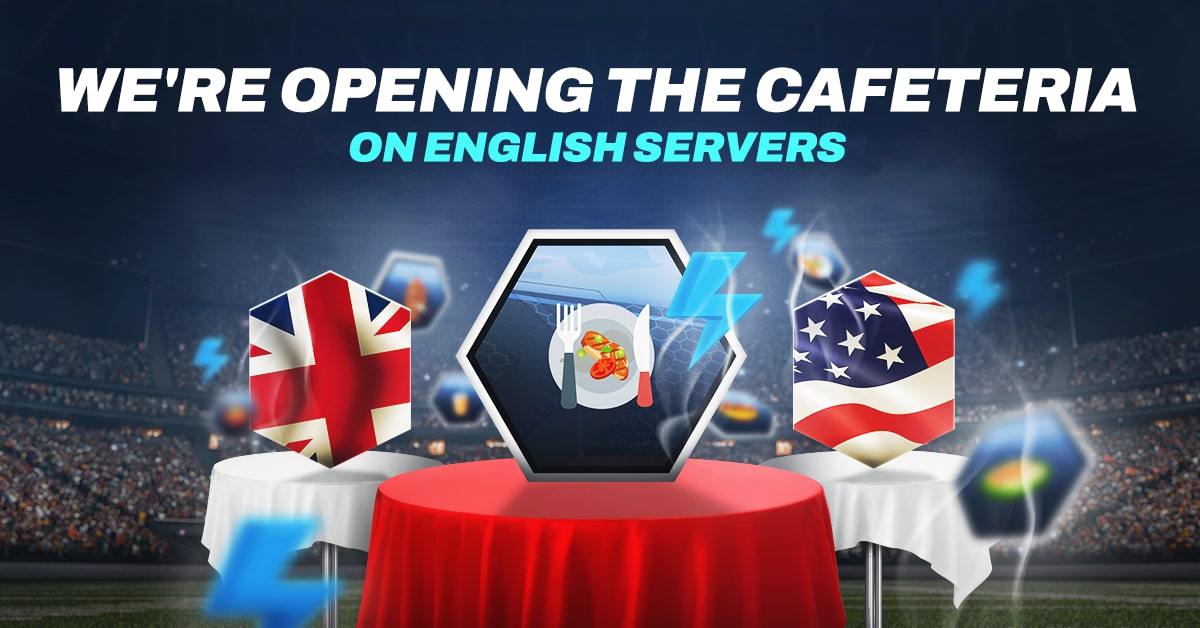 GET YOUR ENERGY. CAFETERIA IS OPEN! 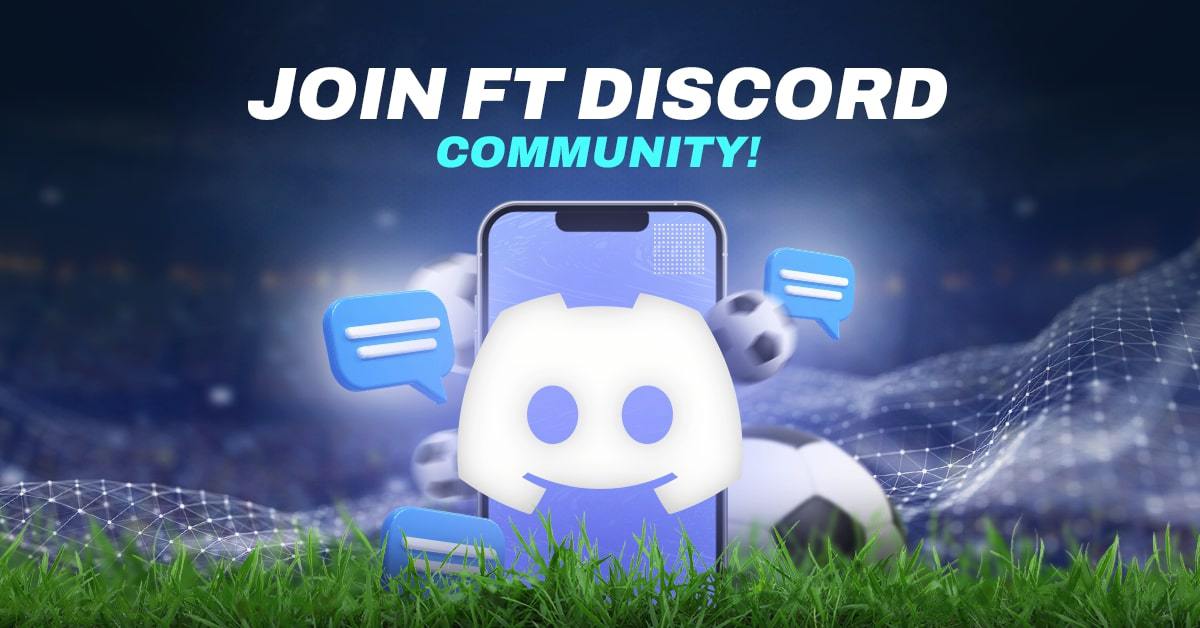 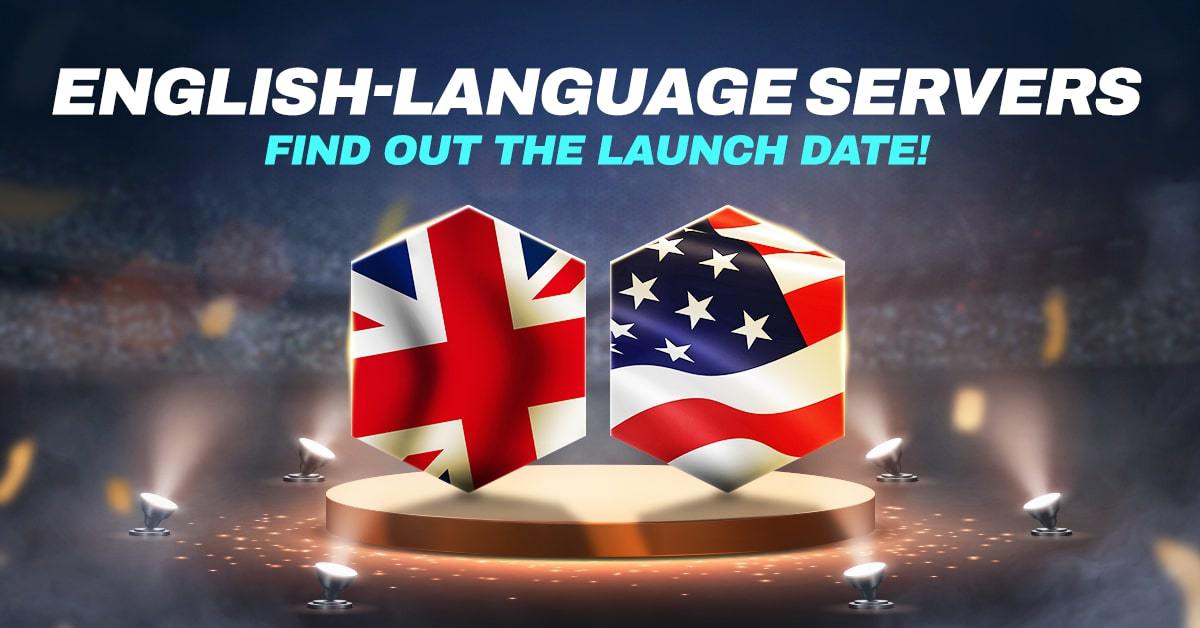 THE LAUNCH OF ENGLISH-LANGUAGE SERVERS!