In FootballTeam, the club's income is based on a complex and realistic system. To increase revenues, the management must take several important factors into account, namely:

- expansion of the stadium and the number of seats,

- the number of supporters of the club,

- the level of the league in which the team is competing.

Income from the match is shared equally between both clubs. Still, it’s almost entirely dependent on the home team. This way, visitors can benefit from playing against teams from higher leagues or with more expanded stadiums.

Each club starts with 1,000 fans. Wins allow you to gain more fans, and failures reduce their number. What's more, the higher the level of the games, the easier it is to gain new fans.

Competition in the higher league increases not only the interest from fans but also ticket prices and the maximum level of stadium expansion.

How Many Fans will Come to the Match?

In simple terms, the ticket algorithm looks as follows:

1. The number of both clubs' fans is added up.

3. The price for one ticket is fixed according to the league. Cup matches are considered prestigious and are treated as first league games. Friendly games, however, are counted as a 5th league match. In addition, the interest of fans is determined. A lot of fans will come to the 1st league match. On the other hand, if a 5th league match is to be played - the supporters will be much less willing to show up. 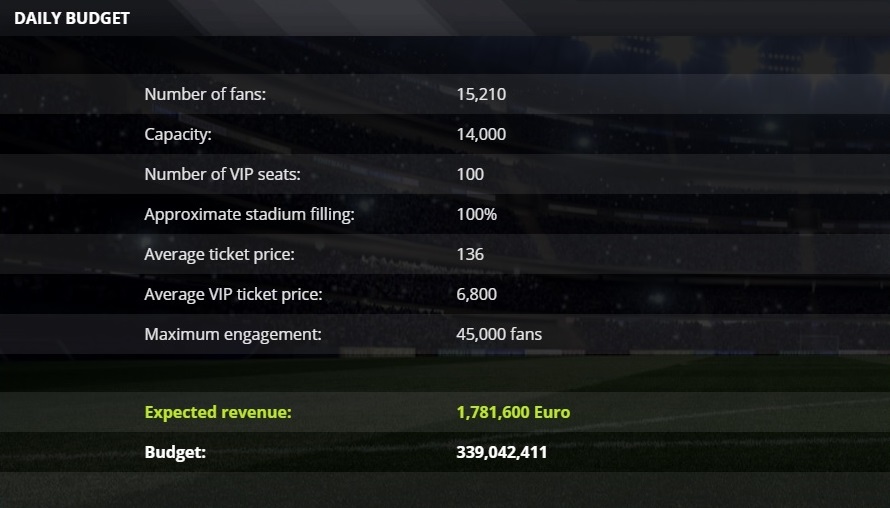 4. The ticket price is multiplied by the number of fans interested.

It should be remembered that too fast expansion of the stadium does not always have to be the optimal strategy. If the club's stadium can accommodate 30,000 fans, but the home and away teams only have 10,000, some seats in the stands will still be vacant.

Expanding the stadium is an important part of the game, but it must be backed by a strong, successful team. It usually takes more time to gather a large group of fans than to enlarge the stands.

This system gives clubs even more reasons to gather well-performing players, train, and advance to the higher leagues. This is the best way to expand your fanbase and generate more income.